It’s been quite the day of culinary experiments in my house. Hubby decided he was in the mood to expand his already-respectable cooking repertoire and settled on Gordon Ramsay’s pork belly recipe as his adventure of choice. However, he quickly found out pork belly is harder to find in Indianapolis than a shred of hope for this year’s Colts team. The guys at Kincaid’s finally came through with a cut and I was subsequently banished from the kitchen while hubby got down to business.

Once the belly had baked, an afternoon-long waiting period ensued. I took this as my cue to get into the kitchen for some baking of my own. Wracking my brain for something to do with the fresh dill in my refrigerator, I recalled a card in my recipe box for dill onion bread. Or, in my house, dill bread. (Tangent – I fed the toddler his first taste of onions the other night in an omelet, and he loved them. But I digress…)

If I remember correctly, I believe I got this recipe from my mom years ago, but I don’t recall her ever actually making it. Thinking it would be a fun activity to share, I enlisted the toddler to help. My little sous chef did a surprisingly good job, and was pleased as punch to help me measure out ingredients, stir them together and even knead out a little loaf of his very own.

Recipes that require things like yeast and precise timing intimidate me a little bit. Even though I’ve made bread before, I couldn’t help but fear throughout the whole process that I was doing something terribly wrong and would wind up with flat loaves as hard as hockey pucks. Have to admit, I was pleasantly surprised at how simple this bread was to make. There’s not much to it, really, not many ingredients and quite a bit of downtime in the middle. I mixed the dough, kneaded it smooth (a very soothing tactile motion, if you ask me) and put it in a bowl on top of the stove to proof.

bread dough on the rise

Happily, it rose like magic. I let it double and punched it down as per the directions, brushed it with egg white and let the toddler sprinkle sesame seeds on top. Into the pans for a second rise, and then into the oven it went.

Thirty minutes later, voila. Real live actual bread. Somehow, we managed to resist cutting into the fragrant little loaves as soon as they came out of the oven and instead, saved them for dinner.

fresh baked dill bread hot out of the oven

The results: the pork belly was wonderfully flavorful, but extremely rich. There’s really very little meat to be had on this cut of pork; it’s mostly fat. Imagine a big slab of roasted bacon and you’ll start to get the idea. I can’t imagine how Gordon fans eat big squares of this stuff. The English cuts must be much leaner is all I can figure.  Still, it tasted yummy and the crunchy greasy crackling on top was delicious, a huge hit with the toddler.

The bread was the teensiest bit dry (I think I got worried that it would still be gummy inside and left it baking a little longer than I should have), but basically it was good. Nice and crusty on the outside, tender and soft within. The dill flavor was very subtle, and went perfectly with the pork belly and the fantastic roasted vegetables hubby served alongside.

My son was super proud of “his” bread, and declared it much better than “mommy’s bread.” Watch out, Gordon. You might just have some up-and-coming competition… 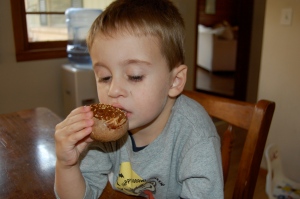 the toddler enjoying the fruits of his labor