Day three in Milan and just tonight, it’s finally stopped raining. It feels like we were pretty much stuck in the hotel all day yesterday and most of the day today. Still trying to kick the jetlag and all that jazz as well.

At this point, I can’t really remember what we did yesterday. I guess that’s because we really didn’t do much of anything. Being All Saint’s Day, EVERYTHING in town was closed. We were getting dangerously low on our stash of diapers, and not a grocery or pharmacy in town was open. Not even our beloved Il Pavone!! The only establishments open for business in our immediate area were Chinese restaurants. Chicken chow mein is not exactly high on our list for possible dining enjoyment while in Italy.

Figuring we’d have better luck downtown by the Duomo in the more touristy areas, we hopped back on the tram for the 20-minute ride. Our gamble paid off; hubby spotted a sign just off the beaten path and we followed it to Pizzeria Dogana, tucked into a quiet side street a block away from the Duomo. It appeared fairly busy and the picture-postcard menu posted outside looked appealing. Sold.

Hubby seems to be sticking to beer during our time in Italy, which seems unholy to me with all the great wines around. At Dogana, I enjoyed a glass of Montepulciano house wine for a reasonable 4 euros. Not quite the two euro/quarter liter value at Pavone, but still a steal. For dinner, hubby ordered the spaghetti pomodoro, a lovely plate of al dente pasta lightly draped with a silky tomato sauce and topped with a sprig of fresh basil. So simple, but the plate was like a work of art, and the food was sooooo good.

I ordered the risotto alla Milanese; again, a very simply made creamy risotto with saffron. Delicious.

We also split an insalata Caprese, not the best I’ve ever had, but still great with flavorful tomato slices and a mound of tiny balls of fresh mozzarella that soaked up the balsamic vinegar and olive oil I drenched them with.

After dinner, we wandered over toward the Duomo, stopping off for a post-meal gelato. Hubby spied a Pepto Bismol-pink shade of bubble gum flavor and decided it was exactly what the toddler needed. Between the three of us, we made short order of a cone and another of tiramisu-flavored gelato. 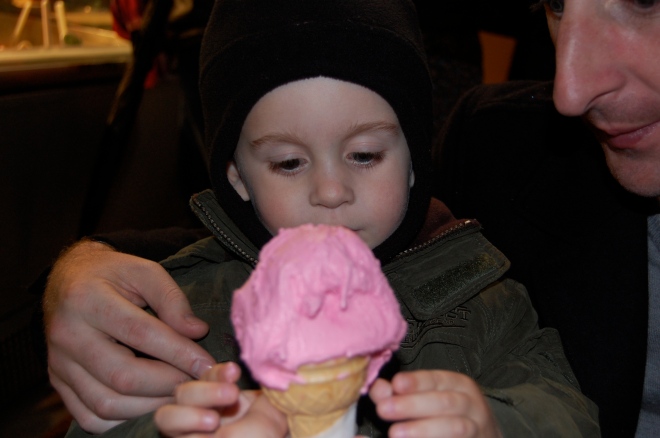 The bubble gum flavor tasted precisely as advertised; it was good, but nearly sickening after a few bites. The toddler fell asleep on the tram ride back to the hotel. However, the sugar buzz came on as a delayed reaction, and he was then up bouncing around the room until midnight. Between that and his two-hour screaming interlude between 2:30 and 4:30 a.m. our first night in residence, I’m convinced the other guests must be plotting our demise.

First order of business today was a trip to the grocery store, as our diaper rations were reaching desperate levels. Hubby took off for his trade show; I packed the toddler up after breakfast and we were off to Iper, the supermarket of the gods. You can scan back and refer to my entry last year for more details, but this place makes foodies like me feel like they’ve died and gone to culinary heaven. Fresh fish, cases of cheese, cured meat, wine, an entire aisle of nothing but pasta… ah. The only thing I don’t like about this place is the checkout. Even with a newly added self-service checkout option, the lines are unbelievable. We waited probably 15 or 20 minutes just to pay for our scant basket of goodies.

The toddler and I returned to the hotel to drop off our purchases, and then commandeered the breakfast room for a picnic lunch of sorts – cheese, crackers, grapes, blueberries and yogurt from our shopping trip. The staff was kind enough to let us use a table, and I hoped our absence would allow enough time for the housekeeping staff to come in and do their thing to the room while we were out. Bless them, they definitely had their work cut out. We can trash a hotel room within minutes like nobody’s business.

After a nap, the toddler and I ventured out to the main train station to purchase tickets for our overnight sleeper ride to Paris tomorrow night. Ugh. If the food is the best thing about Italy, the inconvenience factor is the worst. I struggled on and off the tram and up and down probably a dozen flights of Metro stairs after our transfer, wrestling a screaming two year old and a stroller with people brushing by giving me dirty looks. Only during the last flight did some kind young woman take pity enough to help me carry the stroller up. The man behind the ticket desk was not friendly and although I tried my best to explain what I wanted, I have a sinking feeling I’ve purchased the wrong tickets and we’ll find ourselves crammed into sardine seats for 8 hours all night long on the way to Paris. But enough complaining…

Hubby met us at a tram stop along the way back and we enjoyed a quick beverage in a small charming café before heading to Il Pavone. For tonight’s feast, hubby went with my favorite fusilli della casa and I had a plate of tortellini pomodoro and a side of steamed spinach. Yummy. Even the toddler got into the act, and once he tore himself away from the grissini breadsticks, got interested in a small plate of pasta of his own.

Hubby had missed our earlier visit to Iper, so we strolled back over after we ate to check things out. After I’d taken a few pictures, we were accosted by a security guard letting me know photos are strictly forbidden. Doh. I stammered out an apology and he let us go. I guess we must have looked a little odd, merely taking photos without buying anything, but come on. We’re clearly foreigners, and we’re pushing a stroller around. Not exactly the corporate espionage type. Oh well. I’ve been warned.

I had my heart set on a gelato of my own tonight, but the stand outside the supermarket was closed by the time we came out. Shitballs.

On the walk back to the hotel, hubby stopped short in his tracks in front of some Italian police cars parked on the street. Apparently, he was impressed by the Alfa Romeo brand, a far cry from the old U.S. Crown Victorias you and I know best. Hubby wanted to take a photo, and as he did, a handful of cops stormed in out of nowhere. The toddler and I had already crossed the street and didn’t hear the exchange firsthand. From what I could see, hubby was either making friends or on the verge of being arrested. Fortunately, the polizia didn’t seem to mind and sent him on his way with a thumbs up. Second bullet we’d dodged in less than a hour, we cut our losses and hightailed it back to the room.

Our time here in Milan is flying by. Twenty four hours from now, we’ll be loading up and pulling out for France. Ciao for now!