On my trip to Florida a few weeks ago, my friends Kim and Mike took me out for an Italian dinner that was so good, it merits its own blog entry.

Cassariano Italian Eatery is located on the adorable downtown Venice main strip, tucked in among a string of cute boutiques and cafes. My pals said they happened upon it by chance several years ago, and are now regulars. Then again, it seems the staff and managers treat everyone here like famiglia, which is a good thing.

The interior and vibe somehow manage to pull off casual and sophisticated at the same time. Definitely date night or special occasion-worthy. 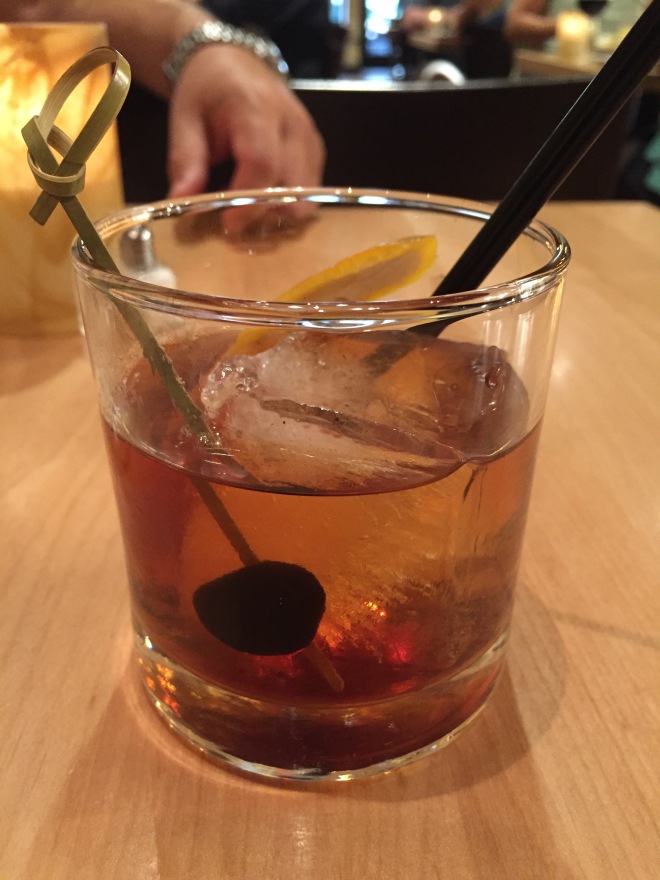 Mike swears that Cassariano’s makes the best Old Fashioneds. EVER. Now, I’m a bourbon girl, so anytime someone throws out a bold statement like that, it immediately piques my interest. I’m not sure I can 100 percent agree with him after my many trips and repeated sampling in Kentucky, Chicago, Indy and well, everywhere… but the one I enjoyed here was pretty damn good.

I think my friends have tried almost everything on the menu, and immediately steered me toward the panzanella di granchio appetizer, tender pieces of soft marinated bread atop sliced cucumber; studded with bits of red onion, avocado and tomato; molded into a round and topped with fresh crab meat. No arm-twisting needed here! I’m a slut for anything with avocado to begin with, and when you throw crab in there, too… holy moly. Fresh and refreshing. The perfect summer appetizer. (I didn’t get a pic, but should mention that the bread basket arrives not with the expected garlic butter or marinara for dipping, but with super-smooth hummus. Well played, Cassariano’s. Well played.)

The Flintstones-esque tomahawk veal chop was impressive and hard to pass up, but we each ordered a different pasta to share and sample.

Forget what you think you know about spaghetti and meatballs drenched in Jersey Shore red sauce. First of all, Cassariano’s makes all its own pasta fresh in house, so there’s that. The meatballs are made with ground lamb (!) and the whole thing arrives at the table artfully plated with roasted grape tomatoes, a dollop of goat cheese and a drizzle of basil oil.

The housemade pappardelle with savory sausage and mushrooms in a velvety robe of ricotta was equally fantastic, although I think it’s something I would probably enjoy more on a chillier fall or winter evening, in front of a fireplace with a hefty glass of red, than in the dead of summer.

The pasta I ordered, though, was my fave. I’ve had gnocchi with creamy gorzonzola and walnuts in Milan, but Cassariano’s took this idea one step further, filling tender ravioli with a toothsome blend of crushed walnuts and ricotta, draping the squares with a light cheese sauce and garnishing with slices of poached pear. O.M.G. Heavenly, and so unique. 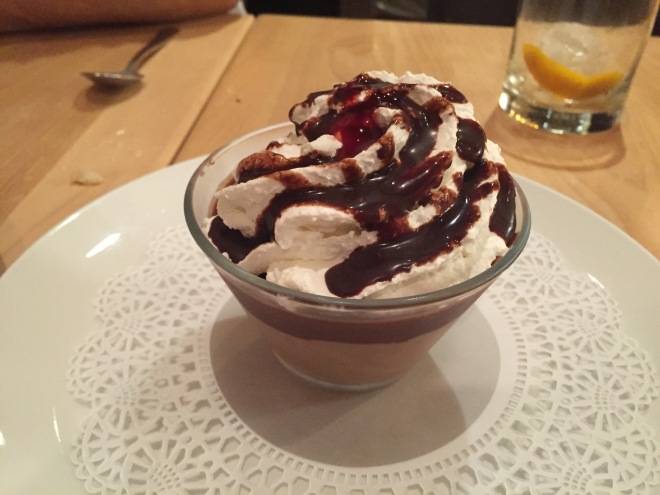 I didn’t think I had room left, but then a classic crème brulee and a parfait-like chocolate mousse arrived. Bellissima, indeed.

This place is definitely on my radar for a return visit next time I’m in the Sunshine State. Molto grazie, Cassariano’s. Mi piace.

It’s taken me longer than expected to get over the jet lag and settle back in, but I’m finally back up to speed. Within the past few days, spring has started to peek flirtatiously around the corner. Temps were 70 degrees yesterday with more of the same expected today. I was so inspired, I planted about three dozen Dixie cups worth of tomato seeds to start on my windowsill and am tending them like a new mommy waiting for their little green sprouts to emerge.

Hubby and I realized we hadn’t had a date night in about a month, since Killarney to be exact. I arranged for a babysitter (thanks Laura and Fiona!), we got dressed up and escaped for a few hours.

One of our favorite date-night spots here in Indianapolis is Mama Carolla’s, a charming little Italian restaurant on 54th Street, just next to the Monon Trail. The first time hubby took me there was toward the end of the first summer we were dating. I was moving to Chicago to take a job there and it was our last real evening out before I was due to leave. We declared the evening a special occasion, and it was the first time I ever saw hubby in a suit. (Hubba hubba!) We had a lovely meal, went to a backyard party afterward at the home of his ex-girlfriend, and then broke up a few weeks later, but that’s another story…

We return to Mama Carolla’s every so often, but figured out it’s been well over a year since our last visit. I was about halfway through my pregnancy the last time we were there. Baby is turning one year old next month. You do the math.

The parking lot was busting at the seams when we pulled in, leading us to wonder whether we should have a plan B in mind. Mama Carolla’s is usually busy enough that we have to put our names in for a table and have a drink at the small bar while we wait, but we were able to snag a table right off the bat tonight. Good thing, because we were both really hungry!

Ambiance is the name of the game here. The restaurant itself is in a cute homelike setting; tables are nestled into the nooks and crannies in rooms of varying sizes. The mood is romantic, with strings of lights draped around and cozy Italian-themed decor throughout. In the summer, a scattering of tables fills the outdoor patio, allowing customers to dine al fresco under the stars next to a small herb garden and pretty rose bushes.

We were seated in the same small alcove where we enjoyed that very first dinner nearly five years ago, but to our dismay, the table next to us was occupied by a somewhat boisterous couple. Really, I’m being polite. They were loud as hell.

With rooms this small, I understand there’s bound to be a certain amount of noisy reverberation, but this was ridiculous. The whole alcove held about 5 two-top tables, all full, which made it noisy to begin with, but this one woman’s voice absolutely drowned out everything else. I couldn’t even hear hubby ask me what I was going to order from directly across the table. After asking him to repeat himself twice, I knew we were going to be in trouble. I asked hubby if he thought we should move, but he shrugged me off.

A quick glance told me that loud woman and her companion hadn’t even ordered yet, and I found myself starting to dread the next hour or so. After a few more minutes of shrieked exclamations and pitchy cackles, hubby came over to my way of thinking and excused himself to speak to the hostess. Mr. and Mrs. Loudtalker made their way outside for a smoke and we made our well-timed exit. As the hostess graciously made her apologies and reseated us in a quieter room, my shoulders started to come down from where they were hunched up around my ears and I started to relax.

In the new room, we were seated next to an attractive family – a young mom and dad, a young grandma and grandpa, another young man and a baby in a high chair — very obviously the first child in the group and the center of everyone’s doting attention. Hubby and I kept stealing glances at the little one all night and sighing; we couldn’t help but think of our own little one back home. Turns out when we asked, they were the same age.

Our waiter was very good, attentive without hovering and a master of perfect pacing. Hubby started off the meal with a Peroni (Italian beer) and I with a glass of Shiraz. Both very acceptable choices.

Entrees at Mama’s start off with a small salad and a basket of warm bread. The salads were good, nothing spectacular, but certainly fine plates of fresh lettuce, etc. with a house balsamic vinaigrette. (Insider’s tip – nix the onion and request bleu cheese crumbles on top…) The yeasty, crusty bread is served warm in a small basket and wrapped in a lacy cloth for a homey touch. With a drizzle of olive oil and a little pepper, it’s darn near perfect.

Hubby and I are creatures of habit. When we find something we like on a menu, we tend to order it over and over again instead of branching out. Therefore, hubby ordered his usual dish — a rigatoni pasta with chicken, spinach and bits of bacon in a brown buttery sauce spiked with flecks of hot red pepper. Good stuff.

My go-to choice here is always the rosemary chicken lasagna, a gorgeous creation of roast chicken slices, mushrooms, tender noodles and cheese, drenched in tomato and alfredo sauces. Tonight, though, I pledged to be bold and try something new – the spinach stuffed ravioli with creamy pesto sauce. It was good, but not as good as the lasagna, which I’m sure I will return to next time around.

I was in the mood for a sweet bite after dinner and ordered a cannoli. In typical fashion, hubby said he didn’t want any, but then proceeded to inhale half of the dessert once it hit our table. The cannoli was smaller than I expected, but I was ok with the size once I took a bite and found out how rich it was. It was a crunchy little cone filled with an almost cloyingly sweet oozy cream, studded with some kind of little green pistachio crunchies and drizzled with chocolate syrup. Again, nothing exceptional, but good.

We made our way home with full bellies and renewed spirits. Gotta make a point to do the date night more often…