Dinner last night at Delicia with a lovely friend. After hearing great things about this place for months now, my expectations were high from the get-go. Maybe a little too high. After our meal, I find myself scratching my head and trying to figure out if I really liked it. I didn’t not like it. It wasn’t a bad experience in any aspect. It just didn’t blow me away to the degree of, say, Seviche a couple months ago.

It would be quite easy to miss Delicia entirely were it not for one small sign in front of the otherwise nondescript SoBro building it calls home. (This structure used to be a video store in its most recent former life.) There’s a tight little parking lot in front of the restaurant, but you’re probably better off to skip it and scope out a space on College Avenue instead.

Once you get inside, though, the sleek and chic decor totally belies the ho-hum exterior with a massive mirror-backed bar, retro hanging light fixtures, a long white banquette running the length of the restaurant, airy beamed ceilings and subdued colors. The place was pretty hopping for a Sunday night with a diverse range of diners in attendance. No kids though. I’d have to check to confirm, but pretty sure Delicia is 21 and up only. And even if it isn’t, this is not the kind of place you want to bring the little guys.

So we ordered drinks and then turned our attention to the menu. I’d never had a caipirinha, and figured I’d try one for something new. (How fun is caipirinha to say, by the way? Go ahead. Try it a few times.) Caipirinhas are traditionally made with sugar cane liqueur, lime and sugar. This would lead one to believe it would be sweet, but not here. To be fair, our server warned me that the Delicia version wasn’t at all sweet, but is instead more light and refreshing. Since it was damn near 90 degrees outside, this was ok by me. And the cocktail was perfectly refreshing for a sultry summer night, but for some reason, it was a little too gin and tonic-ish for my taste (although it doesn’t contain any gin). I’m not a gin fan — see previous posts extolling my love for bourbon. Still, I drank it and it was fine.

My friend enjoyed a glass of sangria. Again, the server accurately described it as being very wine-forward. Fruity? Not so much. Later in the meal, I switched to a mojito. Also refreshing and tasty (and served in a big wide-mouthed water glass – yikes!), but I was a little bummed that the bar here uses a mint syrup as opposed to fresh muddled mint leaves, which look so pretty in the glass. The spearmint flavor came through loud and clear, but halfway through, it suddenly got a little too cloying for me to finish.

While not terribly extensive, the Delicia menu offers plenty of intriguing dishes. This is not your run-of-the-mill Mexican restaurant. If you’re looking for basic crunchy tacos and burritos, keep on driving. Delicia is upscale new-wave Latin cuisine. After debating appetizers for a short while, we agreed to share a spicy beet salad to get things underway. The kitchen thoughtfully split the serving for us, giving us each a beautifully arranged mini-plate version. This might have been my favorite part of the meal. Spicy was an understatement, so much so that it caught me off guard at first bite. These beets will kick you in the throat if you’re not ready, thanks to a bold jalapeno/sour orange mash-up. Elsewhere on the plate were a little mound of salad greens, pretty julienned red radish, crumbles of queso fresco and sweet-salty candied pumpkin seeds. A tasty blend of flavors, and the initial rush of heat quickly smoothes out into something sophisticated and delicious.

Our server had promised us each a little amuse bouche or something of broth redolent with the Latin flavors to follow, but somehow, this item was forgotten until my friend thought to ask for it halfway through our salads. Delivered in a little sake-style cup, I’m having a hard time pinpointing just what this was, apart from an earthy broth with a umami-mushroom flavor. Not quite sure what the point of it was, but it didn’t hurt anything.

I considered several different entrees, namely the pork carnita tacos, the carne chimichurri, and the duck enchiladas I’ve heard several raves about. In the end, I selected the tamal corn cakes (partially because of our server’s strong recommendation), and my friend ordered something called tapou — trigger fish in a coconut milk stew with rice and sweet potatoes. Our eyes nearly popped when the entrées appeared; the portions here are ginormous. We easily could have split one and saved room for dessert.

I thought the food was good, but not great. My plate arrived lukewarm and so heaped with shredded barbacoa beef that I could barely make out the two small, but thick corn cakes beneath. The whole thing was drizzled with a cilantro lime crema and topped with a light sprinkling of pico de gallo. The meat was tender, and there was a ton of it, but I felt a little misled. As it’s advertised, it seems like the cornbread-like corn cakes should be the star of the show here. To that end, I had to scrape off some of the beef just to get to them. And I wished there had been more crema and pico de gallo (then again, I tend toward a heavy hand when it comes to sauces and condiments). The plate was mostly meat, and could have used a little more seasoning. In fact, now that I think about it, I felt like everything I tasted needed a dash more salt to really make it sing. 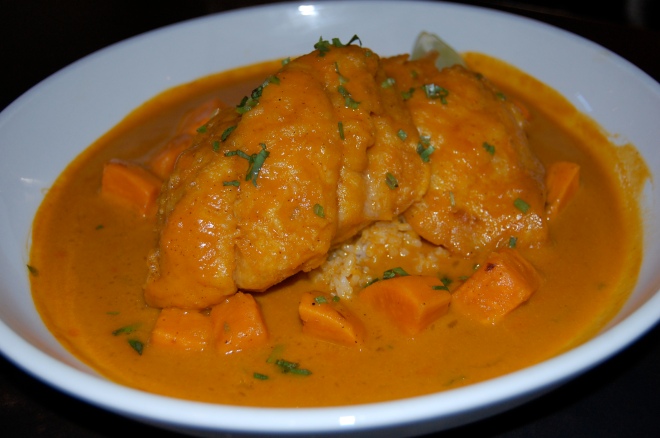 I think my friend liked the fish. I had a bite, and it tasted good, but the texture was strangely chewy. I was expecting it to be much lighter and flakier. The coconut milk broth was yummy and the sweet potato chunks were well cooked. However, I couldn’t help thinking that this curry-style dish would have seemed much more at home in a Thai or Indian restaurant than a Latin eatery.

We made as much of a dent in our dinners as we could, but still called it quits around the halfway point. The short list of Delicia desserts includes flan, tres leches cake, churros and a plantain bake with ice cream that sounded sorta like a cobbler. Alas, our stomachs had reached capacity and we had to pass.

Props where props are due — to our server. While she wasn’t particularly warm or smiley, she did know the menu inside and out, capably answered our questions and offered intelligent comments about the food and drinks throughout our meal.

While Delicia is a breath of fresh air on the Indianapolis dining scene and I’m glad I finally got there, I don’t think I’ll be rushing right back. I know several people who absolutely love, love, love this place, but for now, I’m firmly on the fence about it.

Delicia doesn’t have a web site, but you can locate its Facebook page (including a complete menu) with a quick search.