I was excited to cater a 4th of July party for my friends Brent and Angie… (ok, it was actually on July 3, but no one is splitting hairs…)

Here are a few pics to whet your appetite: 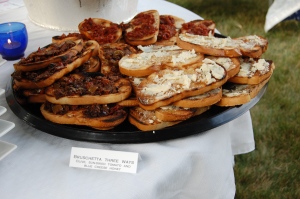 So last night, I had a few friends come around to sample some of my culinary efforts, and so that I could impress my new business cards upon them and beg them to hire me. I feared the cold would keep people away, and there were a few no-shows, but all in all the turnout was good, the evening went well and I think a good time was had by all.

I knew that no matter how much time I had allotted to prep, I would probably end up in a frantic state of panic at the last minute. Things started off smoothly – I shopped on Wednesday, made cupcakes and cleaned the heck out of the house on Thursday so that I could devote all of Friday to cooking.

The first dilemma proved to be the chocolate pots de cremes (aka Chocolate Sex) I was hell-bent on making. I own 12 ramekins, but knew that wouldn’t be enough. The party rental place had them, but at $1 pop, renting was a little pricy. I finally found the solution earlier in the week in the form of little espresso cups I bought for cheap at a restaurant supply store downtown – problem solved!

I’d mapped out a schedule for cooking on Friday, and the pots de cremes were first up so they’d have enough time to cook and chill. I’ve made this recipe a few times already and it’s always been fantastic, dare I say foolproof, so I wasn’t nervous about them at all. Ha. Ha. Bloody ha. I measured out all my ingredients, got all my dishes in place, ready to rock and roll. I started heating up the cream, as you do, when I smelled something fishy. Maybe not fishy, just slightly foul. I stuck my finger in the pot only to discover that the economy-sized vat of Half and Half I’d bought at Costco two days before was sour. Yikes. Just glad I caught it before I’d whipped up 30 of the little buggers! Cardinal rule of chefdom – taste, taste, taste as you go.

I was on a fairly tight schedule, but now I had to afford a few minutes for a quick emergency supermarket run. I took off like a bat out of hell to the grocery for more cream. Did I mention it was -11 degrees and the lock on the driver’s side door on our Explorer is jammed? So there I am, rushing out of the house (I didn’t even brush my teeth), crawling in and out of the passenger door and humping over the gearshift in subzero temps, all in the name of chocolate custard.

I bought my new Half and Half, got it home and mixed up the rest of the recipe, but realized that the custard seemed a little thin as I was pouring it into the espresso cups, which I managed to slop all over and had to spend more precious time wiping drips off of each one individually. The required 30 minutes baking time came and went, and the desserts were still runny. At this point, after all this time, money and effort, I was determined to make these little suckers work come hell or high water. Fortunately, 10 extra minutes of baking seemed to do the trick and by the time the pots de creme had chilled, they seemed to be just fine in taste and texture. Thank God.

My other slight dilemma: I had planned to serve mini cheeseburgers Caprese – little beef patties with Italian seasoning topped with tomato, fresh mozzarella, arugula and pesto. Sounds simple enough, right? But I quickly found it’s hard to keep burgers warm for a crowd without them drying out. I resorted to grilling them off all at once, then reheating them in small batches during the evening. I’m afraid the ones that sat out on the buffet for longer than a few minutes went cold, although the guests still seemed to enjoy them.

I had invited everyone over at 6, but was still humping to get things plated and set up at 6:15. My poor first guest ended up patiently babysitting for a few minutes (thanks, Amy! You rock, and you’re Michael’s new favorite peek-a-booer) while I ran around like a chicken with its head cut off, throwing things on platters and imploring my loving husband to just make the dirty dishes in the sink go away. (Which reminds me, hubby will kill me if I don’t take a moment to publicly acknowledge his help and contributions, which I will sincerely do now. He took the day off work to watch the boys so I could cook, picked up my rentals, washed dishes, managed the Euro 80s background music, did a million other little things to help AND frosted cupcakes. Yes, Virginia, real men frost cupcakes. Thanks for everything, babe, couldn’t have done it without you! Mwuah!)

The rest of the evening was spent eating, drinking and chatting with old and new friends. It was a great learning experience for me, a great excuse to entertain and a great chance to test out some new recipes. I had fun, and I hope everyone else did, too. Thanks to my guests for their attendance and support!