The South rises again, y’all! Then again, did it ever really fall? Certainly not in any culinary sense, that’s for sure.

I’m just home from the first conference of the Midwest Travel Journalists Association, held in Frankfort Kentucky, with a full heart and a full stomach. In the past week, I’ve managed to consume plenty of bourbon and eat my weight in pimento cheese.

Liberty Hall served as the site of our opening night reception, the genteel historic home of John Brown, one of Kentucky founding fathers and the commonwealth’s first senator from 1792 to 1805. The handsome red brick home he completed building in 1801 still proudly stands (as does son Orlando’s residence on the same property) and holds original family furnishings and heirlooms. (A few quick fun facts — Margaret Wise Brown, who wrote the beloved children’s book “Goodnight Moon,” is a direct descendant, and the property is supposedly haunted by a friendly ghost known as the Gray Lady.) 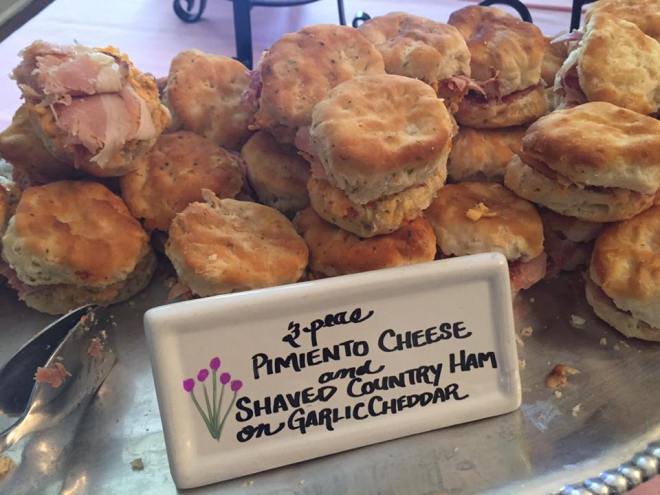 Speaking of pimento cheese, I enjoyed a soulful pimento cheeseburger with crispy fries and a well-made Maker’s Mark Manhattan the night before at Serafini.

Bourbon, of course, is the flavor of the day (every day) here. You’ll find it infused into coffee, as I did at Kentucky Knows, where artisan owner Tony Davis ages Arabica beans from Antigua Guatemala in Buffalo Trace bourbon barrels with spectacular results. I sampled the caramel barrel-aged variation in the store, but opted to take home half-pound bags of the straight-up bourbon and bourbon ball flavors instead. 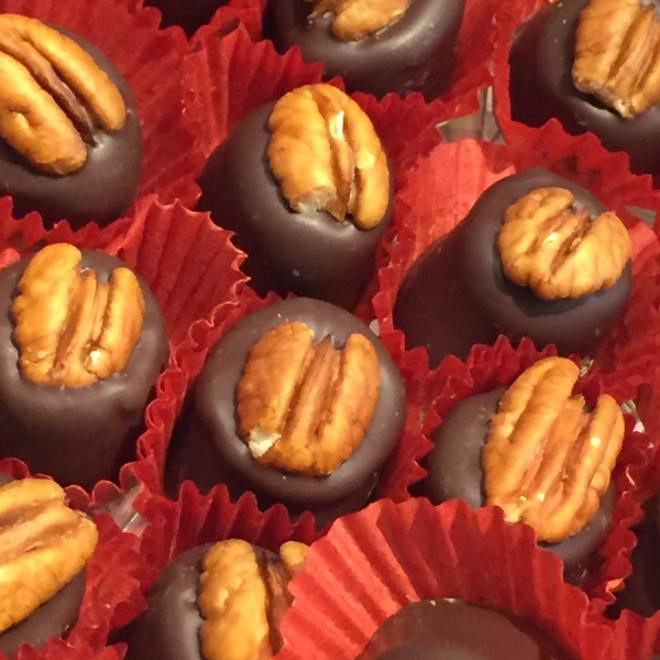 Quirky little Rebecca Ruth Candy Factory is credited with the original Bourbon Ball recipe around these parts — a bourbon-laced nougaty confection covered in chocolate and topped with a pecan. You can’t get in and out of Bourbon Country without tasting at least one, and good luck stopping there. Two childhood friends founded the business back in 1919, and locals loved their products so much, they gathered and donated their sugar rations during World War II to help keep the company going. The factory remains in Ruth’s family to this day; you can get a quick behind-the-scenes tour of the factory, but don’t expect to come away with any insider info. The secret recipe is fiercely guarded.

If you want to cut right to the bourbon chase, beeline straight to Buffalo Trace, the oldest continuously operating distillery in the country since the late 1700s. The campus is absolutely beautiful with the distinctive smell of cooking mash floating through the air, populated with soaring red-brick warehouses housing barrels of bourbon in various stages of aging. Take your pick of five different tours, all are free and include a chance to sample some of the wares at the end. (Personally, I’m partial to the flagship Buffalo Trace brand for cocktails, but have been known to upgrade to Eagle Rare when I’m feeling fancy.) 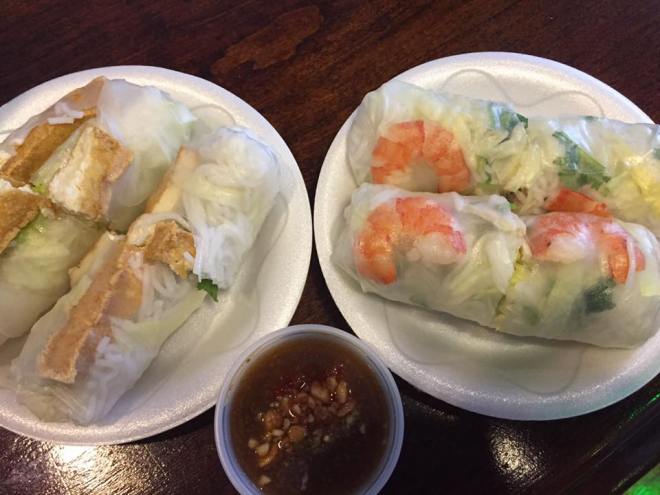 I was a little surprised — and pleasantly so — to discover authentic Vietnamese food in Frankfort’s quaintly walkable downtown. Mai Saigon satisfies cravings for ethnic cuisine with super fresh spring rolls filled with tofu, shrimp, rice noodles and cilantro served with peanut dipping sauce; huge fragrant bowls of pho with all the garnishes; and richly flavored noodle dishes studded with veggies and chicken.

Of course, I’m only scratching the surface here, but hopefully have whetted your appetite for a trip to Frankfort all your own! For more info on Kentucky’s enchanting capitol city, go to visitfrankfort.com

Bakersfield moseyed into the trendy Mass Ave dining scene several months ago, setting up shop in the space formerly known as Bazbeaux. To be honest, I totally forgot this used to be Bazbeaux at all until I just typed that. That’s how different it looks now.

I went there for a Saturday night dinner-and-drinks girls’ night out, and it proved to be a good choice. The shine definitely isn’t off the Bakersfield penny – the place was packed with a crowd that overflowed onto the sidewalk out front. Three of my friends were already there when I arrived, holding down a set of bar stools in prime corner real estate. The décor is industrial-chic with brick walls, nifty caged hanging light fixtures and clever little nods to the rockabilly-ish “Bakersfield sound” musical era. Case in point, the women’s restroom is indicated by a picture of Loretta Lynn on the door. All in all, a young hipster’s see-and-be-seen sorta digs.

So Bakersfield is part of a franchise with additional locations in Cincinnati, Columbus and elsewhere. The claim to fame is Mexican street tacos and an eye-crossing list of tequilas, although the joint carries a perfectly respectable selection of bourbons and whiskeys as well. The girls were already well into a pitcher of margaritas by the time I got there, so I grabbed a glass and joined in before I’d gotten a good look at the drinks menu. Otherwise I might have sipped and sampled a bourbon or two, or ordered up a Chester Ave that sounds suspiciously like a Sazerac. Three of the signature craft cocktails feature Buffalo Trace bourbon. These are my kind of people. I don’t often drink margaritas, but when I do, this is just the way I like ‘em. Fresh, sweet and tart with lots of salt on the glass.

an extra salty margarita with chips and guacamole

The food menu’s not huge, but as our server said, they’d rather do a few things and do them well rather than offer a ton of stuff and do a half-assed job. Ok, maybe the half-assed part wasn’t his exact wording, but that’s what I imagined he said. Here’s what you’ve got to choose from – chips and salsa, chips and guacamole, chips and queso (get the idea??), a couple of salads, a couple of tortas and eight soft taco variations.

The guacamole and tray of chips were enough for all four of us to share, and these were some darn good chips. Freshly made from white corn (and even gluten-free, which we discovered after the dietary-challenged member of our group made an inquiry). The guacamole was top-shelf, too, a very basic recipe with big chunks of fresh avocado, a little squeeze of citrus and a few pieces of radish (!), an unusual addition, but a good one. Yummy stuff. We also gave the red and green squeeze bottles of salsa a good workout; I preferred the green.

tacos and a side of black beans

I think we managed to sample six different tacos. They’re small enough to order two or three per person (although we stuck to a dainty two each). The most fun tacos to say also seemed to be the tastiest — the cochinita pibil with kicky achiote braised pork, pickled onion and cilantro; and the huitlacoche, a vegetarian option with corn truffles, roasted poblano and cotija cheese. A little crema on top, a squirt of green salsa, and we were cooking on gas, baby.

My chicken mole taco was also good, but not quite as good as the cochinita pibil. I hadn’t realized I’d ordered two braised meat tacos until they arrived. The mahi fish taco and the rajas (another veggie option) that my friends got both looked good, but I didn’t get the skinny on whether they liked ’em or not. Everything we ordered disappeared in short order, so I’m assuming they did. Best of all, each taco only costs $3 or $4, making Bakersfield surprisingly affordable for lunch or dinner. Even when you tack on some chips for a few more bucks and a drink or two, you can still get in and out of here for $15 to $20. A very refreshing surprise for a downtown night out.

After hanging out here for about two hours total, the bill was paid, we rolled out and girls’ night out raged on. I’d come back to Bakersfield again in a second. The food was great (and cheap!), and I’d love to sniff around that bourbon list a little more…