For a Hoosierized taste of the Southwest within the gorgeous confines of the Eiteljorg Museum, Sky City Café makes a delicious and distinctive lunch destination. Especially during the summer when you can sit outside on the terrace to enjoy spectacular views of the canal and the Indianapolis skyline along with your soup and sandwich. (Is it just me, or does everything taste better when you can eat outside?)

Lunch at the café kicked off my recent three-day tour of White River State Park, and the meal got things off to a great start. I’d never eaten here before and was intrigued by the menu, heavy on Southwest-oriented offerings and even a few American Indian-influenced items to consider. This eatery’s got a unique foothold in the local market — if there’s another restaurant in town that features American Indian cuisine, I’m not familiar with it.

Many in our group opted for the soup/half salad/half sandwich combo — your choice of two for $8.75. I was advised that the signature corn chowder was definitely worth a try, so I asked for a cup of that and half of a “Desert Gobbler,” a roasted turkey sandwich with pico de gallo, smoky gouda cheese and cilantro pesto on a sourdough boule.

My dad also ordered the soup and half of a chipotle shrimp po’ boy. Everything was delivered to our table freshly made and looking appetizing.

The soup had a nice corn essence, but I thought it could have used a little punch of something to really kick it up… chili powder? Jalapeno? I dunno. Can’t quite put my finger on what it needed to really take it over the top for me. My sandwich was hearty and savory. I’m a sucker for a good pesto, and the cilantro used here lends an unexpected but quite successful taste twist. (Note to self – might have to try to recreate this at home…) 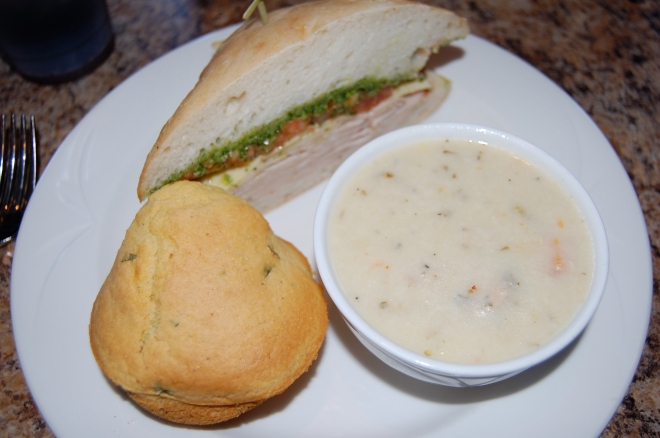 My dad’s sandwich was full of tender little fried shrimp topped with shredded lettuce and a drizzle of kicky chipotle lime mayo. 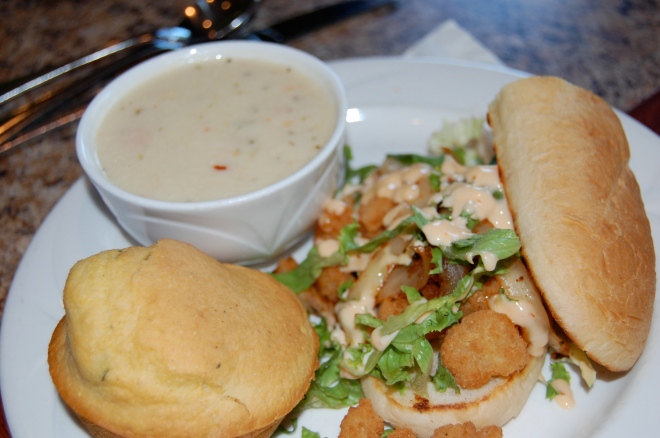 With our sandwich-soup combos, we also each received a big corn muffin, which seemed like a little overkill on the bread, but was certainly tasty. I didn’t finish the muffin, but crumbled some of it to float in my chowder for some texture and a nice double-hit of corn flavor.

Other Sky City Cafe temptations I’d like to try: the daily quesadilla special; the Sonoma vegetarian sandwich of fried red and green tomatoes with fresh cilantro and pepperjack cheese; the Tatanka buffalo burger with guacamole and pico de gallo on a toasted onion bun; and the Oregon Trail salad of chipotle molasses grilled chicken with dried cranberries and a quince vinaigrette. Excuse me while I grab a napkin; my mouth is watering.

I love the colorful interior décor of cafe – rich green walls with dark wood trim, and the tiny flowering cactus centerpieces were appropriate and adorable. 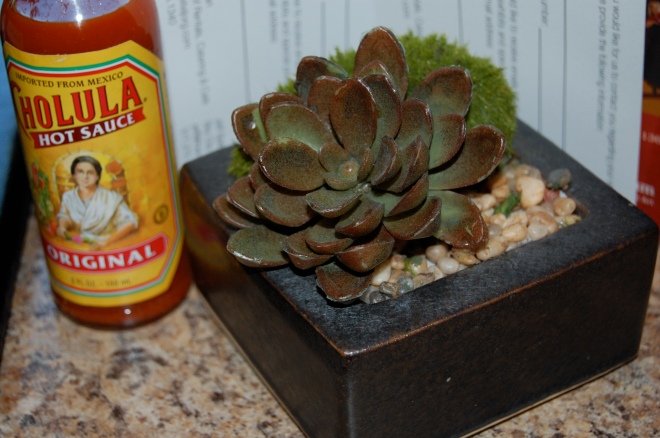 If you have time during your lunch hour, the Eiteljorg’s provocative Red/Black exhibit is definitely worth a walk through. (So is the rest of the museum, but you really need a full morning or afternoon to see it properly). The Red/Black display explores the shared history, interactions and cultural traditions of Native Americans and African Americans, and introduces some thought-provoking issues of race and identity. Don’t wait too long to see it; the exhibit only runs through August 7.

I wonder what the American Indian equivalent of “bon appetit” is…