Before delving into a new post, I must apologize for being missing in action so much this summer. Suffice it to say the past few months have been pretty tumultuous for personal reasons, but I pledge to do better in the future and not let weeks lapse between blogs!

With that said, let’s talk pizza. Everyone’s got their personal fave, and once it’s been established, it’s hard to sway opinion. I was raised on Pizza King in Richmond, and I’m sure my former classmates and childhood compadres will agree it still holds a special place in the palate for nostalgic reasons. It’s pretty much a given that we’ll end up ordering a Royal Feast at some point during any visit to dear old dad’s. The pizza itself is distinctive, even if it’s not anything gourmet, or really even spectacular. Flat, fairly cardboard-ish crust slathered with sweetish tomato paste then generously dusted with tiny cubes of chopped pepperoni, sausage crumbles, onions and peppers diced so small you have to really look for them, cheese and a few mushroom slices, broiled quickly and sliced into squares. That’s it. Nothing fancy, but dependably good.

Once I moved to Indy and started working downtown a ahem, er number of years ago, I was introduced to the beauty of Bazbeaux. And although there have been minor flirtations with other pizzas and pizzerias since (primarily Some Guys and Bacino’s in Chicago), Bazbeaux still tops my list when I’m in the mood for a steamy, cheesy slice of deliciousness. 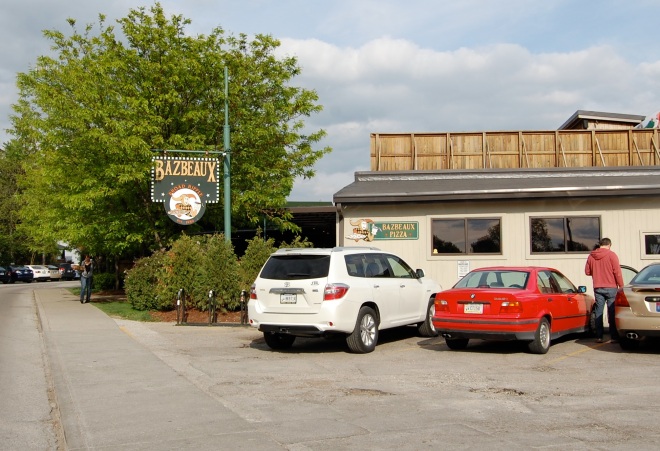 Bazbeaux throws off a slightly circa-1980s Seattle grunge vibe. The atmosphere is fairly bohemian with a funky edge. Cooks and servers are usually tattooed and/or pierced and don’t smile much. They do, however, know their stuff when it comes to rocking some good ‘za.

Beyond the build-your-own options with all the usual toppings (and some not-so-usual toppings), Bazbeaux’s menu details a bunch of really great specialty pizzas to please both carnivores and vegetarians. There’s all manner of accoutrement here — the Tchoupitoulas pizza offers a Cajun twist with blackened shrimp, andouille, roasted red pepper and fresh garlic. The Cubano elevates with black bean salsa and capicolla, ham and salami sourced from the Smoking Goose. There also are several interesting seafood pies that arrive adorned with crab, shrimp and albacore tuna. The only other place I’ve ever seen tuna on a pizza was in Provence… I’ve never had a sandwich here, but I hear the spinach melt is worth a try. 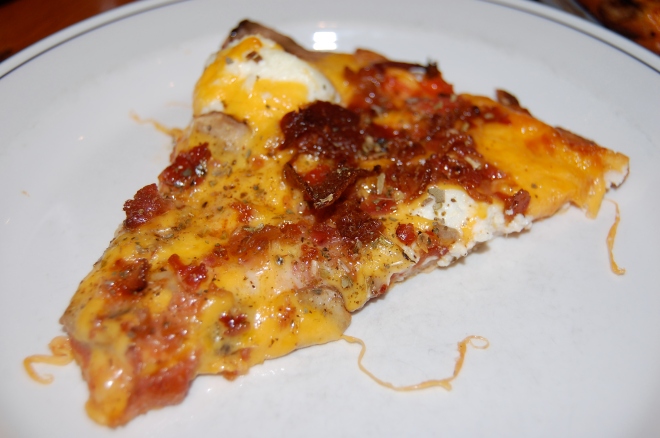 I really like the B.O.T. (bacon, onion and tomato) and the Garden, laden as it is with artichoke hearts, spinach, olives and other veggies, but my Bazbeaux go-to is the Quattro Formaggio. It all starts with a cracker-thin crispy crust and then heaps on Romano, cheddar, mozzarella, provolone and dollops of ricotta. Wait a sec, that’s really five cheeses, isn’t it? Huh. Anyway, as if all that isn’t ooey, gooey goodness enough, they take it over the top by tossing on mushrooms and bacon. See what I mean? You really can’t go wrong. Tack on a nicely assembled side salad with bite-sized shavings of Parmesan scattered across the top (the creamy basil dressing is what I always ask for), and you’ve got all the makings of a fantastic meal.

the standard side salad with creamy basil dressing

For dinner, the deck overlooking the canal at the Broad Ripple location is a chilled-out spot for al fresco dining. And if you’re downtown for lunch, Bazbeaux offers one of the best deals in town — a mere $5 or so scores you a large slice of pizza, side salad and a fountain drink.

For more info, check out www.bazbeaux.com.