My dad had never been to St. Elmo’s, up until about a week ago. I’ve suggested going several times over the years, only to be soundly rebuffed. “It’s too expensive.” Some of Dad’s friends have been to St. E’s from time to time, including one gentleman he knows who apparently was extremely vocal about finding it overpriced and overrated. I think Dad had been swayed and made up his mind that there was no way he could consciously enjoy a meal that costs that much.

Until Devour Downtown came to the rescue… Twice a year, a collection of the most upscale downtown Indianapolis restaurants bands together to offer 3 course meals for $30. The promotion takes place twice a year and lasts for a few weeks at a time. (How could I not have known about this before now??) We’re talking about the best fine dining establishments in town, places you couldn’t get in and out for less than $50 to $100 per meal under normal circumstances. What a deal! And on the list, I found St. Elmo’s.

For non-Indy readers, St. Elmo’s Steakhouse is perhaps the quintessential Indianapolis eatery. It’s been around for a century and serves what I would venture to say are some of the best steaks you’ll find in the Midwest, if not the country. The menu is a short list of meat, yet their claim to fame is a shrimp cocktail starter with a horseradish sauce so spicy it’ll blister your sinuses. The place is seriously old school, and everybody who’s anybody dines here when they come through town. In fact, the walls are lined with autographed photos of sports stars, musicians, politicians and celebrities who’ve visited at one point or another.

When Dad came over to visit us and the boys last weekend, I decided to spring my ambush on him. He’s really helped me out this summer with babysitting on many occasions, and I never did get him a Father’s Day gift this year. I based my pitch on the premise that I’d much rather do something like take him out to dinner at St. Elmo’s than struggle to buy him some piece of clutter that will only end up relegated to a closet, drawer or shelf only to sit there unused and forgotten. It wasn’t as hard a sell as I expected; he agreed much more readily than I thought he would, although he feared such an outing might quickly become a habit.

It being a Saturday night, I figured a reservation was probably a smart idea, but when I got online to make one, the earliest seating we could get wasn’t until 8:30 p.m. Bummer. It was only mid-afternoon and neither of us had eaten much for lunch, so we decided to chance it and head down early, arriving at about 5:20 p.m. To my delight, there were tons of open two-tops in the bar and when we asked the hostess about a table, she got us seated immediately in one of the main dining rooms – score!

I think Dad was momentarily blinded by the wait staff, all smartly decked out in tuxedos, but when he saw the diversity of our fellow patrons, he relaxed a little bit. In our room, there were all kinds of dining customers – from a few couples on dates to a young family with two small kids to a tableful of Gen-Con gamers. The crowd ran the gamut.

The Devour Downtown menu is a scaled-down version of St. Elmo’s classics – we both opted for that famous shrimp cocktail followed by filet mignon entrees. The waiters were super-attentive without being insincere, overbearing or oversolicitous; in my book, one of the the marks of a truly good restaurant.

A throw-away gimme in many restaurants, the bread basket merits mention here. This basket contained half a dozen or so pieces of warm nibbles in a variety of styles – dense rye slices, a light yeasty roll, and several squares of an addictively cheesy flatbread.

Our shrimp cocktail arrived lickety-split – three huge succulent pieces of shrimp buried under an avalanche of horseradish barely laced together with tomato sauce. Tasty, tasty, tasty. It comes with a wedge of lemon and a few packets of soda crackers to offset the heat.

Next up, the pieces de resistance. The steaks were ideally portioned and thick, expertly cooked to a slightly rosy pink medium well, just like we like ’em. Sides of red-skinned mashed potatoes and garlicky al dente green beans rounded out the plate perfectly. I wish I’d had a camera to take a picture of my dad’s face as he sunk his teeth into that first juicy savory bite. This is a man who eats chicken-fried steak from KFC every Tuesday without fail and thinks it’s a great meal. He immediately proclaimed that he was now ruined and will never eat steak (I use the term loosely) at Golden Corral again.

Even though the St. Elmo’s plate was a smaller-than-normal version, I still couldn’t finish it. I wanted to save room for a bite of dessert and ended up packing the remaining few bites of steak and green beans to take home.

For dessert, we shared a creme brulee and a piece of cheesecake draped with some kind of berry sauce. I could only cram down a taste or two of each and figured we’d end up taking these home too, but Dad polished off the entire remaining portions.

All in all, the meal was absolutely delicious and perfectly paced. Between our two $30 specials, an iced tea for Dad, a massive glass of Shiraz for me and a big tip, we still made it out of there for less than $100. I’m telling ya, this is the way to go if you want an excuse to eat at St. Elmo’s, or any fancy downtown restaurant for that matter, without breaking the bank. We’re already looking ahead to the winter Devour Downtown for our next father-daughter date at St. Elmo’s.

Dad said he woke up the next morning still thinking about the meal and didn’t know why he’d waited so long. 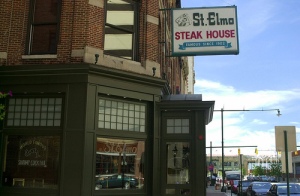