We saw the stands being erected for a street market on one of the streets shooting off from Bastille while we were walking around in search of Valentine’s Day dinner. Sure enough, the next day it was teeming with vendors and throngs of shoppers. This market was a little more spacious than the one we came across up by the Eiffel Tower the other day, but no less busy or impressive.

We spent a happy half hour or so wandering up and down the stalls, checking out the wares. Mountains of sumptuous strawberries, oceans of fish the likes of which we’ve never even heard of, bins of olives, honey, hats, purses — you name it. It’s too bad the weather isn’t a little bit warmer, I found myself yearning to assemble the perfect picnic and seek out the nearest garden. 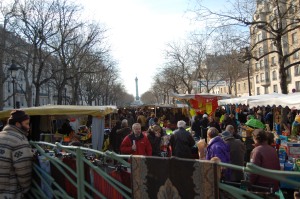 As an quick aside – Even the terms of endearment here are food-related. One such example, people call their children and loved ones “mon petit chou,” which literally means “my little cabbage.” How cute is that!

Earlier in the morning, the baby and I hoofed it over to the supermarket to pick up some rations and supplies. As we passed a high school tour group, I heard two of the girls catching sight of us and cooing about what a cute little French baby I had! The ultimate compliment! Could we really be passing for locals?!?!

I’m afraid I committed a cardinal sin – I stopped into Starbucks. Hubby cringes as I write this. As a seasoned traveler, it is nearly unforgivable to him to frequent an American chain establishment when there are so many local authentic French cafes in proximity. I justified my actions by reasoning that I just wanted a cup to go on the way to the store. Plus, I knew the coffee would be consistent. Starbucks, alas, is the same everywhere. Disappointingly, quite a few cafes seem to serve coffee out of a machine, not the good perked kind you’d expect.

So anyway, I ordered my grande latte and asked for directions to the supermarket, then went on my way. However, in wheeling the baby stroller over cobbled stones and streets, half of my coffee ended up sloshing out all over the pram. Divine justice, perhaps?

After a spin through the market, hubby offered to take the baby off my hands for a few hours so I could enjoy a visit to Sacre Coeur. My favorite sight on my last trip to Paris four years ago, I was really looking forward to a return visit to the scenic spot. I’d really hoped hubby would want to join me, but he declined and in retrospect, I’m glad he did. The stairs and crowds would have been difficult to navigate with the baby in tow. So, I hopped on the Metro and was on my way.

Coming off the Metro in Montmartre, I got a little confused. For starters, the exit itself entailed about three flights of stairs up a narrow winding staircase. Ugh. By the time I and my fellow Metro-ers emerged into the daylight, we were huffing and puffing like the Big Bad Wolf. The spiraling stairs disoriented me and I didn’t immediately see any directional signs to the cathedral, so I ended up setting off in the wrong direction. Fortunately, a big looping turn through a pretty residential area (more uphill climbing) deposited me where I needed to be.

The white domes of Sacre Coeur gleam from the hillside like a sentinel, and although it was slightly hazy, I imagine that in the sunlight they shine as if they’ve been kissed by heaven itself. As noisy and thronged as the exterior of the cathedral is, the interior is reverent and quiet the second you step in the door. The sanctuary literally took my breath away, it’s hard to believe this kind of beauty actually exists. The sun streamed through the stained glass windows to illuminate the faces of the visitors below. Talk about a religious experience in the truest meaning of the word… I’m not Catholic, but it’s impossible not to feel in God’s presence here and I found myself reciting a silent prayer. I lit a candle in honor of my mom and one for my father-in-law as well and left feeling spiritually renewed.

Once you step back outside into reality, the commercial side of Paris tourism slaps you in the face. The crowds here are unbelievable – groups of people in all shapes and sizes speaking every language under the sun, cameras and tour guides in hand. A duo of Polish wannabe rappers were accosting the eardrums of passersby with their boom box and their self-promoted street show, which as far as I could tell consisted of a few So-You-Think-You-Can-Dance-style hip thrusts, some juggling, and a lot of hype.

Hungry, I made my way slightly off the main souvenir shop drag into a cafe for a snack. The Six Nations rugby tournament was this weekend, and I found myself seated next to a table full of enthusiastic and loyal Scots, both the men and women decked out in kilts. I ordered a Croque Monsieur sandwich and my first Coke in about a week. Croque Monsieur is another French menu mainstay; you can find them in almost any cafe or bistro. It’s basically a grilled ham and cheese sandwich, but this being France and all, they find a way to make it richer and more decadent. The cheese is added on top of the bread, along with a little bit of creamy bechamel sauce, and then the whole thing is broiled. When’s the last time you had a grilled cheese that required a knife and fork? Delish. You can even get it topped with a fried egg, in which case it becomes a Croque Madame. (A reference to ovaries perhaps??)

Unlike in America where your food often arrives with a whole slew of condiments, the standard food adornment here is mustard. Servers bring a little carrier to your table that contains salt, pepper, and a small jar of spicy Dijon. And when I say spicy, I mean SPICY. This stuff will clear your sinuses and make your eyes water if you take too much. It’s yummy in small doses, though. Also, there seems to be one kind of salad dressing here and one kind only – a creamy tangy dijon vinaigrette. Don’t even think about asking for Ranch.

Hubby and I decided our tummies and our wallets needed a little break from dining out, so I embarked upon operation Cook-At-Home tonight, a real adventure in a kitchen the size of a closet. Two electric burners and a tiny cutting board made cooking here feel like a Top Chef challenge, but I managed ok. The knives, pots, pans and tools here are sparse, but what we do have is of the highest quality, so that helped matters quite a bit.

I’d stocked up at the store for spaghetti with a sort-of Bolognese sauce. The electric burner took about 20 minutes to boil a pot of water for my pasta, but that was the most difficult hurdle I had to overcome. I jazzed up a bottle of store-bought marinara sauce with some hamburger, mushrooms, zucchini and tomatoes. With a side salad and some fresh baguette, it wasn’t bad. It felt good to cook, but I really found myself missing my arsenal of spices from back home. I had also picked up a bottle of Cotes du Rhone at the grocery for 2.40 euros, and was pleasantly surprised to find the quality on par with much of the wine we drink back home at three or four times the price. 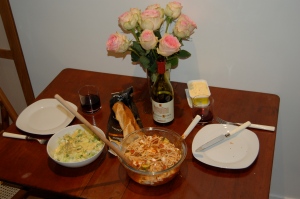 our first home-cooked meal in Paris

As I sit here writing this, it’s cold and misty outside, yet here I am, safely ensconced in a cozy little cafe with a cup of cafe au lait cooling on my table and a view of the Bastille monument just outside the window. At the table next to me, a stylish older woman feeds a small Yorkie terrier tiny pieces of sausage off her plate.